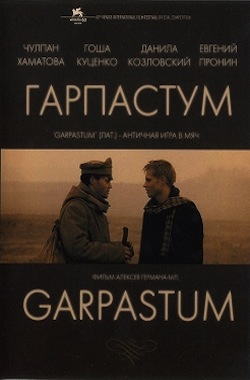 An atmospheric period piece of exquisite beauty set in 1914 in St. Petersburg, the capital of collapsing Russian Empire. World War I has already begun. Four young men stick together and play on the same football team. Two of them, Andrey and Nikolay are brothers. Their mother has died and their father is terminally ill. They live with their uncle in his apartment. Andrey has an affair with a wealthy woman. Soon all of their lives and world will be shattered and ruined by Revolution of 1917. But there is still some time left for them to cherish their dreams and indulge in their passion for garpastum (“garpastum”, ancient Greek ball game”. Alexey German, Jr. is at his best in his second feature film.

Winner of an Special Mention, at the Bratislava International Film Festival 2005 : For visual mastery