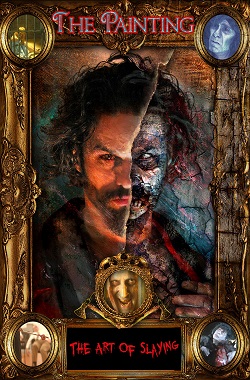 The painting : the art of slaying

Edward Alfonso Lexington, the talent-less son of a deceased famous artist will stop at nothing to be famous himself. He lures unsuspecting artists to his home to paint and then signs his name to their art, but not before ordering their murder, with the help of his faithful butler. He then meets a girl that inspires him as an artist, but his evil deeds come to an end when he crosses paths with an artist/voodoo queen who casts a spell on him that turns him into a monster. On his deathbed, he makes his confession and his unfinished masterpiece is revealed.