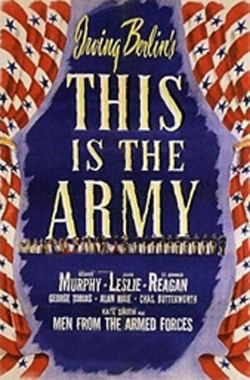 This is the army

In WW I dancer Jerry Jones stages an all-soldier show on Broadway, called Yip Yip Yaphank. Wounded in the War, he becomes a producer. In WW II his son Johnny Jones, who was before his fathers assistant, gets the order to stage a knew all-soldier show, called THIS IS THE ARMY. But in his pesonal life he has problems, because he refuses to marry his fiancée until the war is over.

Based on the stage musical by Irving Berlin.

Winner of 1 Oscar in 1944: Best Music, Scoring of a Musical Picture (Ray Heindorf)