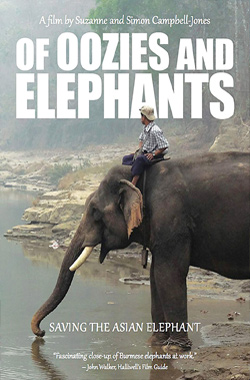 Myanmar, Burma, is the last country in the world using trained elephants and their handlers, men known as Oozies, for ‘selective logging’ – taking out one tree at a time. Together they have saved the forests, but tragically the elephants are not maintaining their numbers.

Burmese timber elephants are semi‐captive. They work during the day and are let out into the forest at night to forage and socialize. Each handler, the oozie, begins his day by tracking his animal and bringing it back to camp for a hilarious bath before the day’s work begins.

Being the first film crew in since the re-­‐opening of Burma, the “Of Oozies and Elephants” team were able to capture scenes seldom if ever seen. Embedded within a group of international scientists led by ‘elephant lady’ Dr. Khyne U Mar, access to the elephant camps was unique and unprecedented. And, the story is one of wonder and amazement.

Winner of the Audience Award, at Bath Film Festival 2013