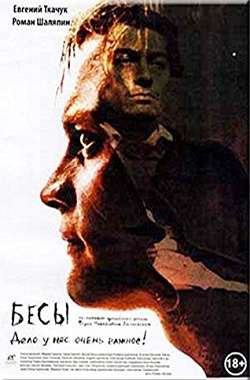 Demons is a free and eccentric interpretation of the world acclaimed novel by Fedor Dostoevsky, directed by Roman Shalyapin and Evgeny Tkachuk, 2 young famous theatre and cinema actors. The film was initially planned as a pamphlet in pseudo-documentary style. The directors managed to keep artistic quality of the novel and openly discuss the importance of questions asked by the writer in the novel for modern society. Practically identical transfer to the screen of the text about terrorist group of Verhovensky, talented acting and poetic image are the signature characters of the debut film.