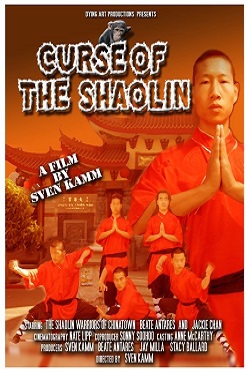 Curse of the Shaolin

Curse of the Shaolin is a humorous account of the trials and tribulations of making a 'cursed' documentary about the Shaolin Warriors of Chinatown. These Shaolin Warriors Monks, five innocent young men who grew up in the Shaolin Temples in the middle of China, now struggle to survive performing the ancient art of kung-fu in the entertainment capital of Los Angeles. But can holiness survive Hollywood?

Filmmaker Sven Kamm was introduced to the Shaolin by actress Beate Antares and together they decide to explore the lives of these young kung-fu masters. While making the film, Kamm finds out that there is a rumor that if you reveal the secrets of the Shaolin will unleash the same deadly curse that supposedly killed Bruce Lee. Initially all is well, but soon there are hints of this strange curse, and the project begins to fall apart. And just when they think it can’t get worse, Kamm find out he needs to have open heart surgery. Kamm is convinced that he has fallen victim to the mysterious curse.