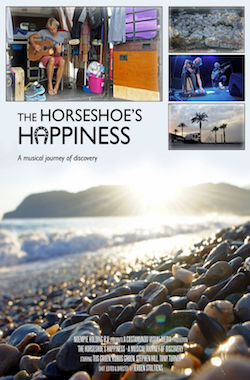 The Horseshoe's happiness is about Tijs Groen, a former Dutch athletics champion who gave up his running career to pursue a new and unknown musical adventure in southern Spain. Tijs has always played the guitar as a hobby but he never really considered to become a musician. While on holiday in Spain he visited the small beachtown of La Herradura (Spanish for ‘horseshoe’) in Andalucia. Here he met interesting musicians, an inspiring guitar maker and he learned about flamenco and guitar music in general. Back home he decides that he wants to live in this special and creative place to explore his musical skills and interests. He buys an old van, refurbishes it and moves to The Horseshoe. From this nomadic home he studies the guitar, meets new friends, like-minded people and arranges gigs in bars, restaurants and simply out on the streets. THE HORSESHOE'S HAPPINESS follows Tijs during his first year in Spain. A very intense year in which he works hard to discover his musical style as well as his ideal lifestyle after giving up on his secure life in the Netherlands. With ups-and-downs, Tijs lives through all the seasons in the coastal area, from the cold and abandoned winter to the crowded and touristy summer. During this cycle he is slowly confronted with the consequences of his choices. More and more he has to find answers to questions about where he comes from, and where he’s heading to.

Co-production between Spain and Netherlands.