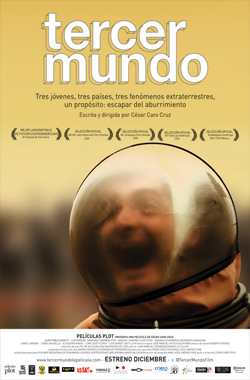 "Tercer Mundo" is a film that mixes comedy with science fiction and tells three stories related to extraterrestrial phenomena that are about to happen in Latin America. Each story focuses on the lives of young people who want to change their lives and who are looking for a way to make their dreams come true. The first of them is Juan, he lives in Santiago de Chile and for a while he is convinced that a meteorite will impact the city, without thinking, he kidnaps the love of his life believing that he will be able to save it from the impending disaster. Further north, in the Bolivian highlands, Amaya manages to leave La Paz and travel to Central America in search of her father, but first she will have to go through a historic solar eclipse that is about to eclipse her own dreams. Going up north, in Costa Rica, lives Richi, a young mechanic who, excitedly, travels to lakes and volcanoes in search of extraterrestrial lights that call the attention of his girlfriend who has left him for a graceful foreigner. What Richi does not imagine is that this trip will give a new twist to his life. Each of these three stories shows the other side of the "Third World", that which has to do with young people, imagination, myths and the fantastic side of our peoples.