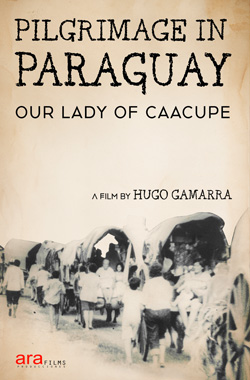 The idea of ??a pilgrimage is deeply rooted in humanity. In Latin America - from Guadalupe in Mexico to the heart of South America - Caacupé in Paraguay - pilgrimage is an important part of the religious life of the people, especially visiting shrines dedicated to the Virgin Mary, the Mother of Jesus Christ and Mother of Christians.

The film tells the story of a Christian Indian who sculpted the image of
the Virgin Mary and shows how the town of Caacupé becomes the spiritual capital of Paraguay every December 8th. Thousands of pilgrims come from all over the nation and from neighboring countries to give thanks for favors received and to ask for blessings. It is the largest human and cultural manifestation of the country, a day of grace, when the Paraguayans feel like a family. The film shows men and women in their relationship with nature, with their neighbors, with the transcendental. He speaks of personal dignity in the midst of poverty and simple peasant life; besides exposing the cultural expressions in poems and songs, often in Guaraní, the language of the heart of the Paraguayans.

Not long ago, these folkloric displays of popular religiosity were rejected, as something irrational and unworthy of human dignity. Today, thinkers, academics and theologians recognize their value and the danger that they will disappear.

The film offers an entertaining and informative look on popular religion and Paraguayan culture. The images were filmed during two years in the first half of the 80's, so they have a great cultural value. The assembly is dynamic, to the rhythm of folk music and original musical compositions composed by the multi-awarded Paraguayan composer Luis Szarán, performed by members of the Asunción Symphony Orchestra. The narrative was written by the director-screenwriter with the cultural historian and musicologist Clement McNaspy.

The film, in its narrated version in English, was shown in several countries of America, USA. and Europe.