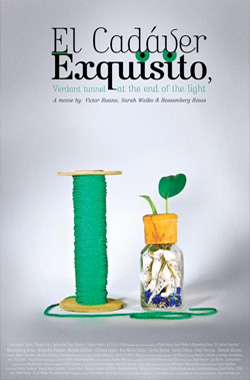 1011/5000
"The Exquisite Corpse" (recalling the game of the same name) uses a technique with a particular structure inherited from surrealism that is executed collectively. The experiment is carried out by parts that seem unconnected but are then directed to the same point, which in this case serves to draw the everyday life of Salvadoran society, going through deep issues and filming other resources as simple as the exploration of a forest. At that point the film combines fiction and documentary.

Between volcanoes, rivers and vegetation, there are heartbreaking stories of war, death squads and poverty, making a historical journey through the stage of the Salvadoran civil war. The camera then flies to a typical Central American house. Stories of prostitutes and transsexuals; religious fervor; ancestral traditions; migration; discrimination; violence and impunity; artisans who make colorful blankets with threads, as varied as the population itself.