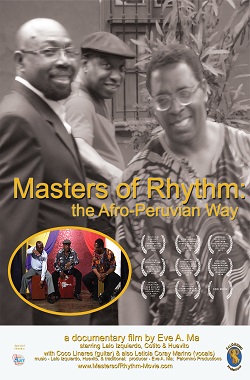 Masters of Rhythm: the Afro-Peruvian Way

We open with our three stars -Lalo Izquierdo, Cotito (Juan Medrano Cotito) and Huevito (Freddy Huevito Lobatón) - performing on the cajón (cajon drum) and singing a song written by Huevito in praise of Afro-Peruvian culture. At key intervals in the song, we see Izquierdo and Cotito leaving their home to enter the cultural organization where the performance is taking place; when they arrive at the door, they put down their cajóns and give each other a big hug. This performance is followed by a brief narration in which we are located in Lima, Peru with the narrator explaining the meaning of rhythm to her and why her love of rhythm led her to Lima to make this film.

From here, we go to a park in Lima's Barranco district where the narrator interviews Lalo Izquierdo and learns from him that although he loves the music, he most especially loves the dance because it allows him to use his body to send messages. Izquierdo is a folklorist as well as a musician (and dancer, choreographer and singer-songwriter), so we return briefly to the living room in the private home and Izquierdo demonstrates the specific meaning of some of the dance movements, movements that his informants have told him come down from the days of slavery in Peru.

As Izquierdo winds up his explanation, amid much good humor and laughter, we go back to the cultural organization's stage and the three percussionists, joined by guitarist Coco Linares and singer Letizia Cory Merino perform a classic, traditional Afro-Peruvian song called Toro Mata. (NOTE: the lyrics of this and the other songs are subtitled in English to make them accessible to a wider audience.) At several moments during the song, there is a small square overlay in which, as the narrator explains in voice-over, we see Lalo Izquierdo and friends performing a dance to this number that he has choreographed.

This is followed by a short scene in a patio where Izquierdo plays and explains the meaning of one of the rhythms - a rhythm dating from the days of slavery, a rhythm which enslaved people used to communicate with each other in the Afro-Peruvian form of "talking drum.s" Next, we cut to Huevito who is sitting on a park bench in Lima's Barranco district with our narrator. She asks him to explain his role as an Afro-Peruvian with the New York jazz group he currently plays with, and he explains that he is responsible for bringing Afro-Peruvian rhythms and instruments into the group.

We then cut back to the living room where the three percussionists talk about the origins of the cajón, its importance to Afro-Peruvian culture, and introduce the fact that soon, Lalo Izquierdo and Huevito will be performing the Afro-Peruvian zapateo fancy footwork. This allows us to move back to the cultural organization's stage where, accompanied by guitarist Coco Linares, they perform this friendly competition to see which one can improvise better steps than the other. This zapateo closes with the two dancing together...and dancers plus guitarist all end at exactly the same moment.

From the zapateo performance, we go into a private home in a small town in southern coastal Peru where a group of boys and men are rehearsing the footwork that gave rise to the zapateo, footwork that is used in the Afro-Peruvian celebration of Christmas called the "hatajos de negritos." And from that rehearsal, we return to the park bench where the narrator is now interviewing Cotito, about the annual, international cajón festival which he helps organize. This festival has at times attracted more than 3,000 participants. In archival footage after the interview with Cotito, we see short scenes from this festival, underlying its depth and draw.

In the next short section, Lalo Izquierdo demonstrates and explains another one of the very old rhythms he has learned from elders in his folkloric investigations. We then return to the living room where the three explain that being Afro-Peruvian is a question of culture, not of skin color. This leads us into our last performance number, a song written by Lalo Izquierdo which also praises Afro-Peruvian culture. It is performed with by the three percussionists on the cajón, along with guitarist Coco Linares and singer Letizia Coray Merino. Near the very end, Izquierdo adds additional percussion with another Afro-Peruvian instrument called the "quijada de burro," or "donkey's jawbone."