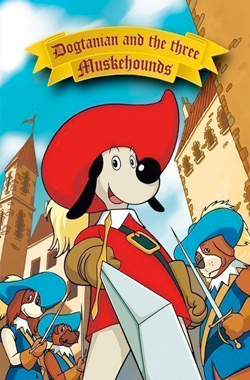 Dogtanian and the Three Muskehounds - 03. Paris, the City of Dreams

Dartacan yearns to become a musketeer in the service of his majesty, so he travels to Paris with an old horse, a few coins and a letter of recommendation from his father to Mr. de Treville, captain of the musketeers. On the way he makes enmity with a mysterious gentleman whom he calls "Black Mustache" for ignoring his name (he later finds out that he is Count Roquefort). Already in Paris, he meets a beautiful girl named Juliet, who falls madly in love.

The story in the series closely follows the plot of Alejandro Dumas' novel, except for some modifications made to reach a children's audience: Julieta replaces Constanza Bonacieux, who was married, and none of the characters die during the series. In the novel Dartagnain is cunning and brave, but in the series these attributes were divided into two characters: on the one hand Dartacan is brave, but somewhat silly, while his companion, the mouse Pond, is cunning and witty.