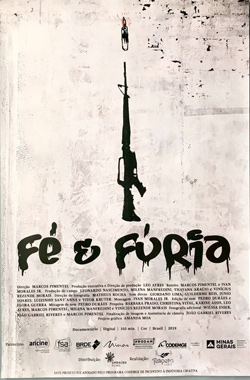 This documentary depicts the religious conflicts that exist in slums and suburbs of Rio de Janeiro and Belo Horizonte, in Brazil, and addresses the growing conservative wave that has spread over the country and resulted in the election of Jair Bolsonaro to the presidency. The unbridled growth of evangelical churches and their relationships with drug gangs has caused an imbalance of religious forces in their communities, resulting in numerous cases of religious intolerance that impact not only worship practices, but also territorial boundaries and the behaviour of inhabitants. FAITH AND FURY takes a close look at the conduct of “evangelical drug dealers”, revealing how religion and power go hand in hand in the peripheries of large Brazilian cities.