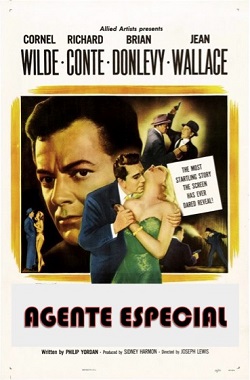 Police Lieutenant Diamond (Cornel Wilde) is obsessed with catching Mr. Brown (Richard Conte), the city's organized crime boss, whose investigation, so far unsuccessful, will earn him criticism from his superior, Captain Peterson (Robert Middleton). Even so, Diamond will not give up in his efforts and will try to catch the criminal, through a last resort: approach Susan Lowell (Jean Wallace), the gangster's girlfriend, who is held by his side against his will and try to make it easier for him. evidence of their crimes.
Directed by Joseph H. Lewis, who presents us in this exhibition of film noir, considered one of the best films in the history of the genre, the complex ins and outs of organized crime, where the lines between good and evil are frequently blurred. Magnificent photography by John Alton.