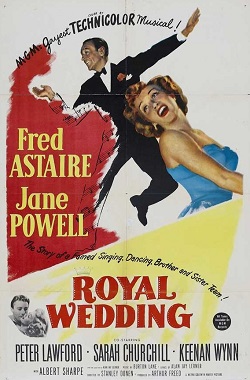 Fred Astaire and Jane Powell play Tom and Ellen Bowen, two brothers and dance stars who, after concluding the show in which they perform in New York, embark to England, where they will participate in a new show that their agent has found for them, at the same time that the royal wedding between Princess Elizabeth and Felipe Mointtbatten will take place. During the trip, both brothers will enjoy romances, she with Lord John Brindale, and him with Sara, a beautiful young woman, and they will delight us with wonderful musical numbers. Notably in this classic musical comedy, the numbers splendidly executed by the prodigious Fred Astaire, and which have gone down in history as some of the best in the musical genre. Among them it is worth highlighting the number in which he uses the elements of a gym in his dance, or the unforgettable number where he dances on the walls and ceilings of a room. Rounding out the cast are the wonderful Peter Lawford and Sarah Churchill.

"Good musical numbers and some memorable scenes for a musical with an Old Hollywood flavor" (Fernando Morales: Diario El País).