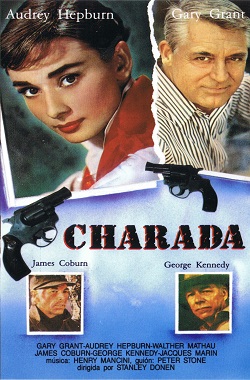 After a short vacation at a ski resort, Regina (Audrey Hepburn) returns home to Paris, her only thought being asked for a divorce. Soon she will have other issues to think about, as her first surprise is received when she finds the house completely ransacked and her husband murdered. Regina is continually harassed and persecuted by the murderers of her husband, ex-convicts who, at all costs, try to find out the whereabouts of a large sum of money, apparently stolen by her husband. A man, Peter (Cary Grant) will lend her help and give her the necessary encouragement to continue and reach the end of the plot.

This film is directed by the multi-awarded Stanley Donen, whose awards include an Honorary Oscar, a Golden Lion for his career at the Venice Film Festival, a Golden Shell at the San Sebastian Festival, the Akira Kurosawa Prize, at the San Francisco Festival, or his 5 nominations for the DGA Award for his functions as director.