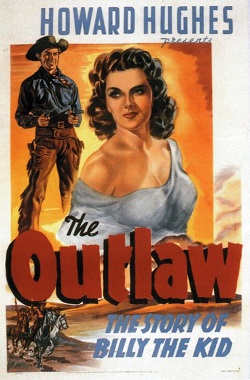 Exciting western featuring three legendary figures from the Wild West: the outlaw “Billy the Kid”, played by Jack Buetel, “Pat Garret”, played by Thomas Mitchell and “Doc Holiday”, played by Walter Huston.
When Doc Holiday arrives in Lincoln, New Mexico, he runs into his old friend, now Sheriff Pat Garret, to whom he tells that his horse has been stolen in an oversight. When he discovers the thief, he turns out to be Billy the Kid, with whom Doc develops a strong friendship. Pat invites Billy to leave town and wounds him in a skirmish. On the run, Doc asks his partner Rio (Jane Russell) to take care of his injuries, and inevitably Billy falls in love with the half-breed.
This western was described as very daring for the time, due to the wasteful sensuality displayed by Jane Russell on screen.