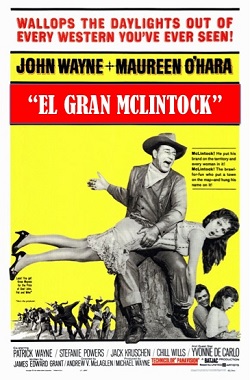 Magnificent western-comedy in which John Wayne plays a rancher and landowner, George Washington McLintock, a respected and beloved citizen of an Arizona town, but who is anchored to outdated principles based on rudeness and machismo. It is because of this and because of the suspicions of infidelity that his wife (Maureen O'Hara) left him a few years ago. However, the return home of the daughter together with the news that she is engaged, will make the ex-couple meet again to decide her future. From this moment on, fights between the two will ensue, which will cause hilarious situations, aggravated by the hiring of a young and beautiful cook on the farm (with the consequent friction motivated by jealousy). In addition, the current governor will show an insane envy towards the position of recognition of the people towards Mclintock and will continually try to discredit him.