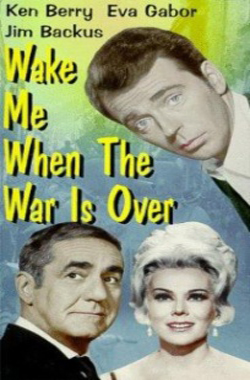 Wake me when the war is over

During the latter days of WW2 an American Lieutenant (Berry), accidentally falls out of an airplane that he was on and falls into German territory. He is taken in by a Baroness (Gabor). She is taken with him and doesn't want him to leave, so she doesn't tell him that the war has ended. So, for nearly five years he thinks that the war is still going on, and so when he leaves her estate he thinks that he has to do what he can to defeat the Germans, cause he can't find anyone who speaks English or is willing to tell him that the war is over.