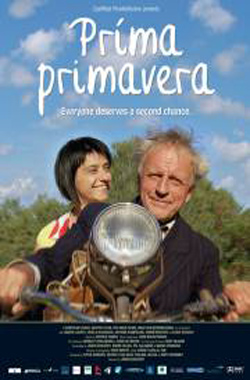 The life of Gabor, a middle-aged man with the manners and naïveté of a child, is turned upside down when his mother is killed in a botched bank robbery. He and a prostitute, Jolie, are the only ones who can identify robber, so they must run for their lives.

Armed with a chandelier as a present to Grandma, the odd pair sets out on a cross border journey to seek refuge in her house in Serbia. But Grandma, long dead, had lived on only in Gabor's imagination and meticulous drawings. While the pair tries to fit in the village, the robber who is relentlessly after them finds an unwitting ally in the local police.

Balancing between crude reality and imagination, the two manage to survive and, in the process, find peace with each other, the world, and, most difficult of all – themselves.

Winner of the European Union MEDIA Prize, in 2007: Fiction Movie

Winner of 1 Award of the Hungarian Film Week, in 2009: Best Actor (Andor Lukáts)

Winner of 2 Awards of the Love is Folly International Film Festival of Bulgaria, in 2009: Best Actress (Vesela Kazakova), and, the Special Jury Prize