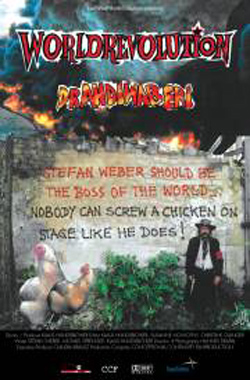 “Worldrevolution“ (Weltrevolution) is the story of Stefan Weber, his rock band “Drahdiwaberl”, and their dream of worldwide revolution. The movie is also chronicles contemporary history of the last 50 years and contains many references to political and cultural events in Austria.

The movie starts with scenes from 1957, at the time of Stefan's 10th birthday. Stefan's older brother shot a few short home movies with Stefan as the main character. He also filmed the first performance of "Drahdiwaberl" at the "Volksstimmefest" in 1969. During the following years "Drahdiwaberl" rose to fame as Vienna's cult band, and still retains this lofty status.

The movie shows clips from live concerts between 1978 and 2007, and documents the mancy facets of the band. The frame narrative is "totally normal day" in the life of Stefan Weber and his pet chicken.