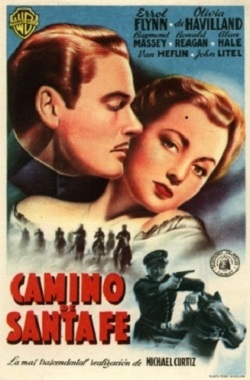 This wonderful western, a masterpiece of the genre, tells the story of the young Lieutenant Jeb Stuart (Errol Flynn), a recent graduate of the West Point Military Academy, and that of his friend and fellow graduate and, later, of the cavalry regiment of Kansas, George Custer (Ronald Reagan). Assigned to the most dangerous post in the military, they will continually have to contend with abolitionist John Brown (Raymond Massey), especially in Harper’s Ferry, Virginia, in the days leading up to the outbreak of the American Civil War. These confrontations will come about because, although the antislavery's intention is good, the methods he uses are wrong.
The confrontation between friends and colleagues will also end up due to the rivalry that arises between them to obtain the sentimental affection of the beautiful “Kit Carson” Hollyday (Olivia de Havilland).
Lots of fast-paced action, romance, shooting... All the ingredients needed to make this movie a great western.