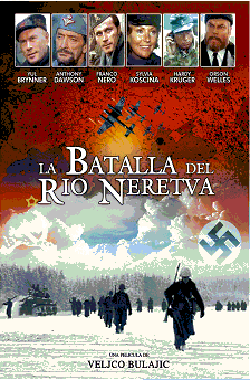 The Battle of Neretva

January 1943, during the development of World War II and before the more than foreseeable Allied invasion of the Balkans, the German and Italian armies decided to launch a major offensive on the Yugoslav partisans of Tito in western Bosnia. To prevent the advance of the enemy troops, the partisan forces will decide to blow up the bridge that crosses the Neretva River and fight on its banks in a bloody and endless battle. This film narrates the enormous efforts and sacrifices of the Yugoslav people to prevent the advance of the all-powerful Nazi and Italian armies in their territory.
To highlight the great cast of international actors that this co-production has, as well as its Oscar nomination for the best foreign film.