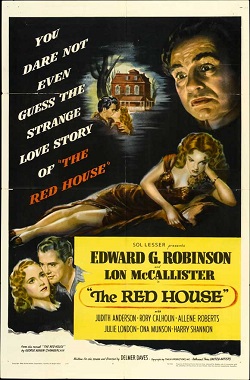 Peter and Ellen (Edward G. Robinson and Judith Anderson) live on a farm, along with their adopted daughter Meg (Allen Roberts). Given Peter's difficulties in carrying out the routine tasks of the farm normally, because he has a wooden leg, Meg convinces him to allow his friend Nath (Lon McCallister) to give them a hand.
Nath will insist on staying in a house deep in the forest, despite warnings from the family, who alert him to the screams that are heard constantly during the night and that come from the mysterious house. Soon, they will begin to explore its secrets, unaware of the dangers that await them.
Great adaptation of the director of "The 3:10 Train", Delmer Daves of the novel by George Agnew Chamberlain.