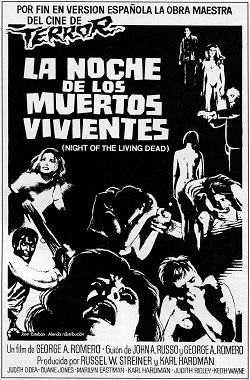 Night of The Living Dead

Emblematic horror film, praised by critics as one of the best of the genre and of cinema of all time, directed by the master of horror, George A. Romero.
Johnny and Barbara, two brothers, go to the cemetery in the outskirts of Pennsylvania, to place flowers on their father's grave. When they get there, they find a man walking strangely towards them. As he approaches, he savagely attacks them, catching Johnny off guard. Barbara will flee from the undead and seek refuge in a nearby farm. Inside is Ben (Duane Jones), with whom they will discover through information from the radio and television that the dead are rising from their graves to feed on the living, as a result of the research work of a satellite in Venus. Soon a group of people will gather inside the house seeking refuge, for which they will have to build barricades to prevent the entry of the undead. In addition, these zombies can only be killed if their heads are severely damaged.