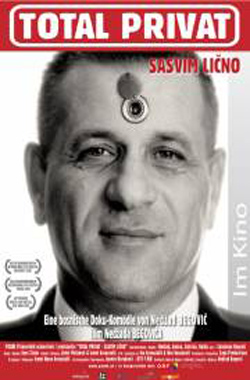 Strikingly original, TOTALLY PERSONAL is a heart-warmingly funny documentary - feature about 47-year-old film-maker Nedzad Begovic´s memories and reflections on life growing up and living in Bosnia.

A deeply moving historical document, the film includes touching personal stories of his family´s survival during the war: how Begovic´s mother would cut the toes off old shoes and burn them for fuel, (she knew that a size 38 shoe was big enough to provide fuel to bake o loaf of bread but that a size was needed to heat a pot of beans), and how the only source of Vitamin C for his children during the war came from the pear tree in their garden.

Despite the tragedy that has befallen their country, Begovic tells his story with an uplifting and wry sense of humour. Narrating the story himself, he shares his memories through a series of loosely-connected vignettes - from having the first television on the block, to how he perceived as a successful young communist when Bosnia was part of Tito´s Yugoslavia, through to adult childhood, marriage, and struggling to make the film without money in today´s post-war period.

Begovic also shares his unconventional childhood theories on life - such as believing that the size of your index finger is in direct proportion to the width of your nostrils or again that the pairs of women´s legs look like upside-down milk bottles! This is stream of consciousness storytelling at its very best.

'With this film, like Andrei Rublev by Tarkovsky, I want to make my bell.' Nedzad Begovic