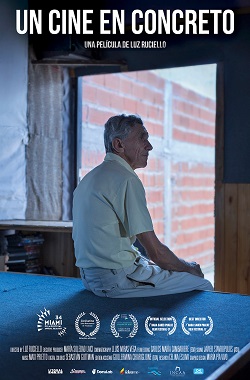 How do we measure our passion? A Concrete Cinema draws close to the intangible spell that is implied by the need to somehow belong to the cinema, to give something back to it, even if we feel it is impossible. The film tells the story of Omar, a construction worker from a small town in the province of Entre Ríos (Argentina) who rejects the idea that big screens may disappear. He will do anything he can to preserve that which he has held on to since he was a child, even though he has to build it with the remnants of what was.