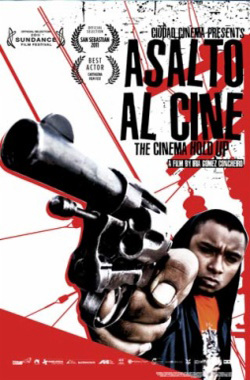 The boys from Guerrero City

Negus, Chale, Sapo, and Chata are teenagers living in Mexico's Guerrero colony. Friends since childhood, they have too much time on their hands and spend most of it drowning their problems in a constant haze of marijuana, lusting after the opposite sex, and hanging out at skate parks, graffiti hot spots, and hip-hop jam sessions. One day, inspired by the pain of empty pockets and the crush against the gritty boundary between adolescence and adulthood, the foursome have a massive brainstorm that will solve all of their problems—they decide to rob the local cinema. Each finds his or her reason to go ahead with the caper, unaware that the ordeal may threaten the only thing they have—their friendship.

Nominated for the Grand Jury Prize, at the Sundance Film Festival 2011

Nominated for the Competition 1-2 Award, at the Warsaw International Film Festival 2011