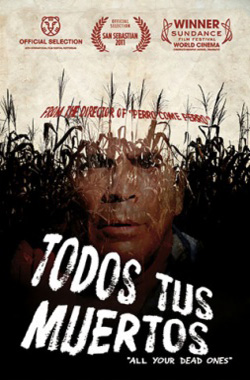 All your dead ones

In this eerie and fantastically shot tragicomic satire, an ordinary farmer's morning routine is interrupted when he makes a grim discovery in the middle of his cornfield—a huge pile of dead bodies. Aghast, he reports the mysterious massacre on what happens to be Election Day. When the small-town mayor and police lieutenant take notice, fearful of unleashing a public scandal, they stall and intimidate the farmer and his family. Meanwhile, the sun beats down, and the eerie corpses remain, refusing to be ignored.

Nominated for a Golden Precolumbian Circle, at the Bogota Film Festival 2011: Best Film

Winner of a Cinematography Award, at the Sundance Film Festival 2011: World Cinema - Dramatic

Nominated for a Tiger Award, at the Rotterdam International Film Festival 2011