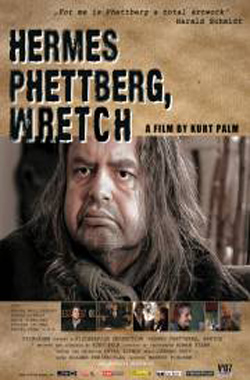 Several years ago, author and actor Hermes Phettberg, a colourful figure on the Vienna scene, saw his star quickly rise from the subcultural underground to the spotlight of TV shows. Responsible in part for this sudden fame was filmmaker and writer Kurt Palm.

With Hermes Phettberg, Elender («Hermes Phettberg, the Wretched») Palm has once again paid his respects to his old friend. From archival material, photos and Phettberg’s own memories, the filmmaker creates a picture of a highly unusual human being. Hermes Phettberg has not only fallen out of the frame, he doesn’t fit into any. It’s no wonder that the radical lateral thinker, legendary talk master and actionist divides the public in a land where the outsider is always viewed with great scepticism. Hermes Phettberg: that is Austria too.