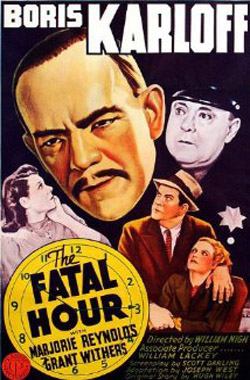 The fatal hour, or, Mr. Wong at headquarters

Mr. Wong investigates the murder of a police officer, nearly ending up murdered himself during a jewelry-store robbery. The principal suspect is Belden (Craig Reynolds), the son of a crooked businessman (John Hamilton) whose perfidy has apparently caused all the trouble.

Based on characters created by Hugh Wiley in the "James Lee Wong" short stories in Collier's magazine.