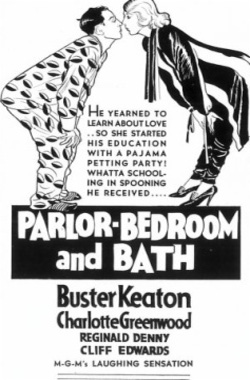 Parlor, bedroom and bath, or, Romeo in pyjamas

Jeffrey Haywood (Reginald Denny) wants to get married to Virginia Embrey (Sally Eilers). However, Virginia refused to marry unless her older sister, the hard-to-please Angelica (Dorothy Christy) gets married first. Angelica, in turn, finds every man she knows too dull and predictable, and for this reason prefers to stay single. Jeff then tries to make Angelica interested in the mild-mannered and timid Reggie Irving (Buster Keaton) passing him off as a notorious playboy to intrigue her. He asks his friend Polly to teach Reggie "how to treat a woman right", but he turns out to be a disastrous learner.

Based on the play by Charles W. Bell and Mark Swan.