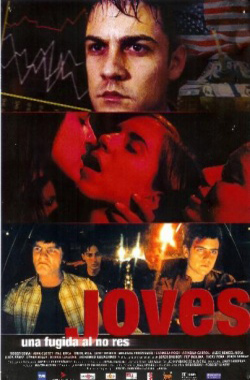 Youth, an escape to nowhere

Jordi, a young broker, wants to succeed in the stock market whatever the cost. Cristina just wants to have fun and the night of his birthday she combines drugs, alcohol and sex in an uncontrolled way. Pau has no plan, and in his failed quest for thrills, he takes violent and xenophobic attitudes. Three young chasing a happiness that would result illusory.

Nominated to an Award, at Butaca Awards 2005: Best Catalan Film