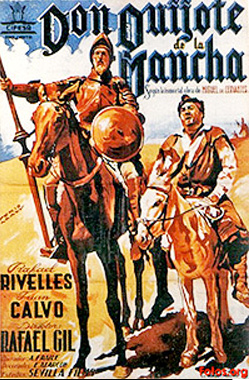 The famous hidalgo Alonso Quijano is obsessed with novels of knights. Such is his addiction that he chooses to live in a world that only exists in his head and become a brave rider astride Rocinante. On his way, he will be accompanied by his faithful squire Sancho Panza and his burrito. This picturesque group leave their village in search of adventure. However, Sancho and his friends have to convince Don Quixote that the visions of giants are not real.

Based on the novel by Miguel Cervantes.

Winner of the Prize of the National Syndicate of Spectacle, 1948: Best Film (3th place)