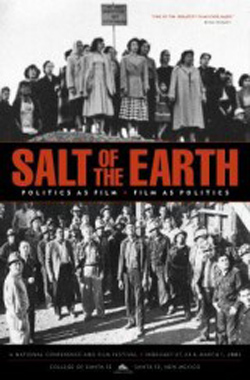 Salt of the Earth

Based on an actual strike against the Empire Zinc Mine in New Mexico, the film deals with the prejudice against the Mexican-American workers, who struck to attain wage parity with Anglo workers in other mines and to be treated with dignity by the bosses. The film is an early treatment of feminism, because the wives of the miners play a pivotal role in the strike, against their husbands wishes. In the end, the greatest victory for the workers and their families is the realization that prejudice and poor treatment are conditions that are not always imposed by outside forces.

This film was written, directed and produced by members of the original "Hollywood Ten," who were blacklisted for refusing to answer Congressional inquiries on First Amendment grounds.

Winner of the National Film Registry in 1992