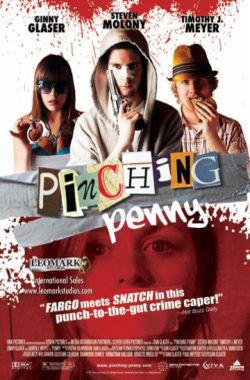 Pinching Penny is the story of Alex, a British small-time crook trapped in the town of Fargo, North Dakota, where his compulsive spending addiction spirals out of control and sends him on an absurd crime spree. Together with his dim-witted Scottish pal Murphy, Alex tries to support his habit with robberies and home invasions, until one ill-fated caper brings them face-to-face with Teddi, a femme fatale who can get Murphy to do anything she wants. It’s Teddi’s idea to up the boys’ game to kidnapping. But when the trio tries to ransom Penny, a rich attorney’s feisty daughter, you just know that, as Alex says, “This will not end well.”