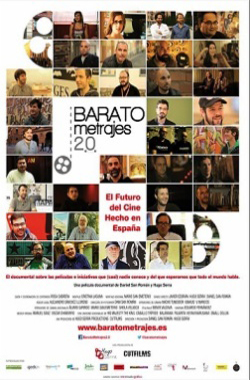 Cheap Films 2.0: The future of the cinema made in Spain

BARATOmetrajes 2.0 is "more than a documentary" that X-ray the most invisible Spanish cinema. It provides protagonism and voice to low-budget filmmakers, distributors, exhibitors or cultural promoters the aim to improve the general health and reputation of Spanish film industry. They are emerging from anywhere to create new business models. Among the over 40 interviewed professionals there are: filmmakers, producers, journalists, critics, as well as a vox-pop section with audience opinions on the street. From a widely objective & perspective, Baratometrajes 2.0 encounters these professionals to analyse, from the Spanish film industry bowels, what could be the future of cinema (particulary in Spain, but can be extrapolated to any place on earth), since it has been loosing audience and having to deal now with the impact of globalization, Internet and new devices.