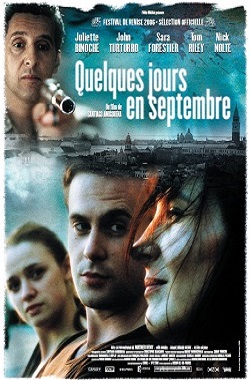 A few days in September

September the 1st, 2001. Elliot, an American C.I.A. agent holding top secret information on the immediate future of the world, disappears. His sole aim was to meet his daughter Orlando, whom he abandoned ten years before. Irène, a French agent who used to work with him, and David, his adoptive son, will help him and lead the girl to her father. Chased by William Pound, a strangely poetic psycho, they will defy the dangers of international espionage from Paris to Venice and finally get to Elliot on September the 11th 2001.

Co-production between France, Italy and Portugal.

Nominated to the Grand Prix at Bratislava International Film Festival 2006