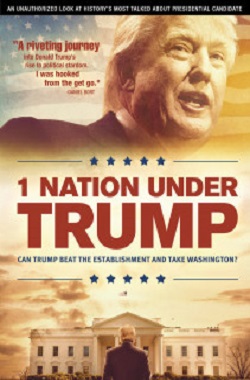 One nation under Trump

1 Nation Under Trump is the first comprehensive feature documentary to delve into the zeitgeist of the unstoppable Donald Trump revolution, from the ground floor all the way to the pinnacle of the 2016 American political landscape.

Shining a spotlight on both the high – and low – points of the tycoon’s improbable rise, from early speaking engagements to explosive televised debates to galvanizing speeches and public media feuds to, finally, securing the presidential nomination, One Nation Under Trump takes you on-board the Trump Train from the very beginning, for an unflinching look at what may be the most important political figure of the 21st century.