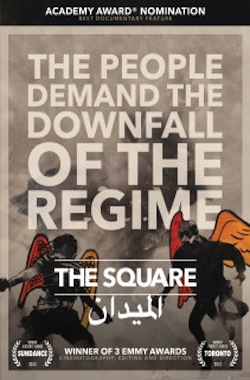 The Oscar nominated documentary depicts the ongoing Egyptian revolution and immerses the viewer in the intense emotional drama of young people on the streets of Cairo claiming their rights and creating a society of conscience. As two governments topple, the personal stories of freedom fighters unfold in an inspiring tribute to the power of citizenship.

The Square is a 2013 Egyptian-American documentary film by Jehane Noujaim which depicts the ongoing Egyptian Revolution of 2011 from its roots in Tahrir Square. The film was nominated for the Academy Award for Best Documentary Feature at the 86th Academy Awards. It also won three Emmy Awards at the 66th Primetime Creative Arts Emmy Awards, out of four for which it was nominated.

Co-production between United States and Egypt.

Winner of an IDA Award, at the International Documentary Association 2013 : Best Feature

Winner of an Audience Award, at the Sundance Film Festival 2013 : World Cinema - Documentary

Winner of the People's Choice Award, at the Toronto International Film Festival 2013

Nominated to an Oscar, at the Academy Awards, USA 2014 : Best Documentary

Nominated to a Humanitas Award, at the International Documentary Association 2013