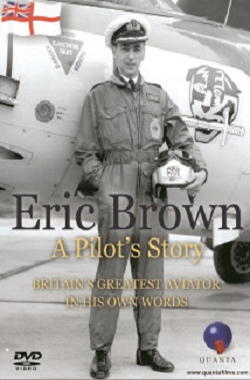 At the core of Eric Brown: A Pilot’s Story is a recent and fascinating interview with Captain Brown (now 95 years old) who tells his story in first person.

Accompanied with spectacular archival footage and rare photographs from Eric Brown’s personal library, Nicholas Jones has once again created a film that will attract the attention of aviation fans, military history buffs, students of British history and WWII enthusiasts alike.

A Pilot’s Story details Browns life and career as an aviator as well his accomplishments as Britain’s foremost test pilot. His personal storytelling is mesmerizing as he recalls moments and missions that only he could convey.