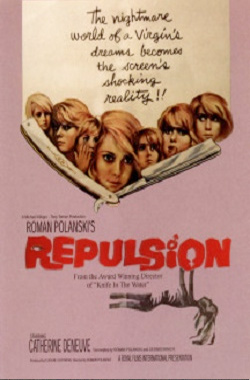 Roman Polanski was still a newcomer to the world of cinema when he unleashed this unforgettable exercise in skin-crawling terror. Repulsion was the Polish director’s first film in English, but that hardly mattered: much of the movie is as wordless (and as weird) as the silent Nosferatu.

The young Catherine Deneuve plays a Belgian girl stranded in ’60s London, a shy beauty with no social skills. When her sister leaves their shared flat, Deneuve goes gradually, quietly, completely mad. Her world becomes Polanski’s paintbox, as the devilish director distorts reality via a series of surrealistic touches (grasping hands that protrude from elastic walls) and out-and-out murderous horror. Very few films cast the kind of eerie spell that this 1965 classic achieves, and it clearly points the way toward Polanski’s Rosemary’s Baby. As with most of the director’s work, what is unsettling is not the overt violence, but the terrifying sense of emptiness and isolation, and the boiling unease inside one’s own mind.