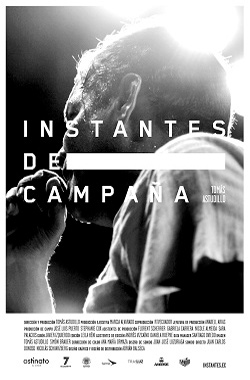 17th February 2013: Rafael Correa wins the elections and becomes President of Ecuador for the 3rd time. 42 days prior, he sails on an epic campaign of echoing songs, speeches and interviews for weeks on end as he tours the country with his team, always saying yes to a handshake or a picture when surfing a crowd of future voters. Photographed in black and white, far from the campaign colours, the documentary distances itself from the vain representation of power and the sarcasm of the press. More than just being a record of a specific historical event in Ecuador “Moments of Campaign” reflects on contemporary forms of political life and its “mise-en-scene”.