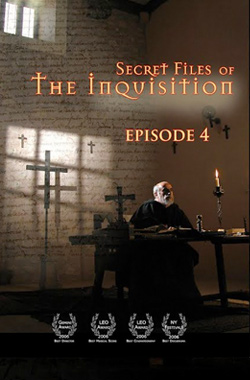 Secret Files of the Inquisition. Episode 4

Based on previously unreleased secret documents from European Archives including the Vatican, Secret Files of the Inquisition unveils the incredible true story of the Catholic Church's 500-year struggle to remain the world's only true Christian religion.

At the dawn of the second millennium Europe was slowly emerging from the blackness and ignorance of the Dark Ages. There were no nations and the people were loyal only to their immediate community and to God. The keeper of God's word was the Catholic Church, the only religion in all of Christendom.

The supreme religious leader, the Pope in Rome, crowned the Kings who became rulers of the Holy Roman Empire stretching from Sicily north to Poland. The Emperor was ruler of the temporal world while the Pope and his Bishops reigned supreme over the Spiritual world.

By the 12th and 13th century, cracks began appearing in this ordered world. Emperors no longer submitted to being crowned by the Pope and across Europe Kings demanded the right to select their own Bishops. But for the Pope the most terrifying threat came from upstart Christian sects who challenged church doctrine and the absolute power of the Roman Pope.

To preserve the purity of the faith and the unquestioned authority of the Pope, the Church began to crack down on all dissenting with a new weapon: the Inquisition. For over half a millennium a system of mass terror reigned. Thousands were subject to secret courts, torture and punishment.