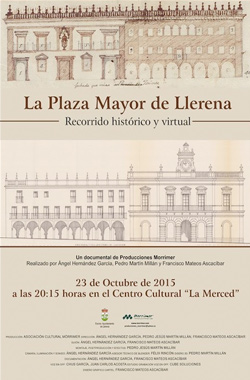 Llerena, a crossroads between Extremadura and Andalusia, preserves an enormous historical, artistic and monumental heritage. The soul of this city is its Plaza Mayor, a space of singular beauty and harmony. Plaza that, in the words of the historian Antonio Bonet Correa, is one of the most significant and finished examples of its kind in Spain. The documentary shows the architectural and urban development of the Plaza Mayor and the monuments that comprise it. The viewer has the opportunity to immerse himself in a journey that begins in the Middle Ages and that will show us the construction process of buildings as emblematic as the church of Nª. Sª. Granada, the City Hall, the arcaded corridors and the Prison and Court. In its preparation we have combined methodologies typical of historical documentation and research with the use of 3D animations.