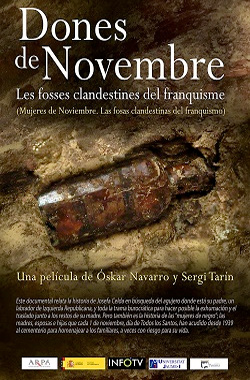 Women of November. The clandestine graves of Francoism

The documentary tells the story of Josefa Celda during the search of the grave where her father is buried, a farmer of a pro-independence political party, shot during the Franco regime in Paterna, and all the bureaucratic plot to make possible the exhumation and the transfer of his remains close of those of her mother. But it is also the story of the "women in black"; the mothers, wives and daughters that every November 1st, All Saints' Day, have come since 1939 to the cemetery of Paterna to pay homage to their relatives, sometimes even at risk for their own lives.

Women of November is the second part of El Terrer, a silent village, about the executions committed by the franquism during the post-war period in Paterna.